Voluntary Health Scotland helped facilitate four informal engagement events as part of the Health, Social Care & Sport Committee’s inquiry into health inequalities. This work was led by the Scottish Parliament’s Participation & Communities Team (PACT) and offered VHS members and stakeholders the opportunity to engage directly with MSPs during subject focused breakout sessions. The PACT also reached out to organisations who were able to facilitate break-out rooms of participants with lived experience, which was an incredibly valuable insight into health inequalities for members.

The events focussed on four themes aligned with the parliament’s other committees with an interest in health inequalities and there were multiple breakout rooms for each session:

These events were an incredible example of how lived experience can be fed into the parliament’s engagement in a meaningful, sensitive and supported way. The organisations who facilitated the break-out sessions focused on lived experience did a phenomenal job in highlighting people’s true experience of health inequalities in their day to day lives. VHS suggested some organisations for the PACT to reach out to, but we were not in the breakout sessions themselves. That said, it was clear to us the significant impact these testimonies had on the MSPs involved. We have since heard that all these evidence sessions have significantly influenced the direction of the committee’s inquiry which highlights the value of the experiences shared by participants.

We have not summarised any of the views shared during these sessions to respect the privacy of participants, but we would like to acknowledge their influential contribution to the inquiry.

We have provided a brief summary of the discussion during the VHS facilitated breakout sessions with organisations, while also keeping these contributions anonymous. Thank you to all our members, stakeholders and partners who took part in these informal evidence sessions.

Claire Stevens, VHS Chief Executive, facilitated the discussion in the VHS breakout rooms, which were primarily made up of representatives from the third sector, the health service, academics and wider stakeholders. There were some golden threads throughout all the sessions, namely the role of stigma, access to support and poverty.

Access to primary care was raised throughout all the engagement sessions. It was felt the triage system in general practice didn’t work with comorbidities. Participants also felt there were significant barriers experienced by people contacting GP receptionists which needed addressed. For example, the 8.00 a.m phone call booking system which was challenging for people who relied on personal assistants to get them out of bed in the morning. 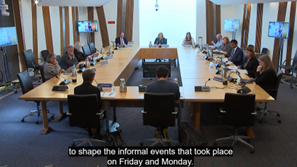 Reducing poverty was emphasised as key by multiple participants, recognising that increasing people’s income was likely to improve their health outcomes. It was suggested the committee should consider the Social Justice & Social Security Committee’s inquiry into problem debt as part of their findings.

The cost of living was a pressing concern throughout all the evidence conveyed to MSPs. We heard that people with MS will face an additional £200 per week on average in bills. People had stopped social and recreational activities due to the associated cost, which reduced their exercise, increased isolation and worsened inequalities. In some cases, people were even stopping treatment and self-management. There were significant concerns pensioners were being pushed into fuel poverty and suggestions we should be increasing benefits rates and expanding the eligibility criteria.

In general, there was a consensus that we needed a much more compassionate social security system than the DWP currently provided. Organisations felt the DWP was not adequately supporting people and in many cases compounded the stress and anxiety people were already experiencing. Universal Credit sanctions in particular were correlated with significant adverse mental health impacts in a study shared by participants.

Some felt proportionate universalism would be the best approach in improving access to support and services. The Universal Basic Income pilot in Wales for care leavers was recognised as a brilliant example of this and a very valuable use of a policy pilot.

“Why treat people and send them back to the conditions that made them sick.” – the issues raised during this session centred largely on this quote from Michael Marmot about addressing the root cause of problems.

The cost of living was once again a huge theme throughout this session. This was primarily discussed within the context of access to healthy food and good housing. One participant explained the challenge in demonstrating outcomes in health from investment in housing.

The intrinsic link people homelessness and health was discussed, noting the relationship worked in both directions. Stakeholders referenced the NICE guidance on homelessness for England, while highlighting there was no equivalent for Scotland. We heard the majority of Community Link Workers operated in areas of high deprivation, and they spoke with housing representatives all the time. It was stressed that there’s nothing GPs can do in ten minutes to help in these situations. Poor housing conditions lead to ill health, including poor mental health. Poor mental health doesn’t get you extra consideration in housing applications. By not addressing housing issues these problems are pushed into primary care.

We also need to appreciate that not all “fixes” will work in all areas, especially in more rural and remote places where the challenges in housing and transport can be a particular barrier to good health.

One of the stark takeaways from this session was the prevalence of in-work poverty, there was an acknowledgment that employment was no longer a route out of poverty. This was often attributed to the Universal Credit system which participants suggested operated based on the full-time model of work. This had a significant impact on older women who could no longer care for grandchildren due to the rise in pension age. This then leads to intergenerational challenges for families in accessing childcare and employment.

There was a strong call for strengthening people’s awareness of their employment rights. A study on the impact of COVID-19 on migrant essential workers was referenced with regards to barriers in access to work, social security and health services. 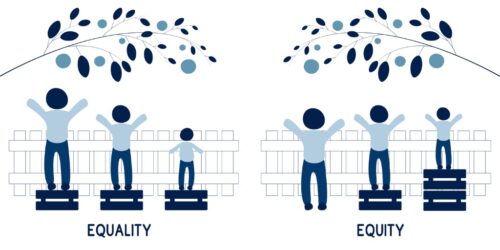 The importance of people’s right to health was emphasised throughout this conversation. We need to enable people to be well as opposed to continuing the model of crisis intervention. This was described as trying to “medicate social problems”, which doesn’t fix the core issue. There were calls for a culture shift in our attitude towards supporting people, removing stigma, poverty and isolation. It was felt that many people and their families needed to approach services armed with their rights or they wouldn’t receive the care they needed. The Inverse Care Law was referenced with regards to those best placed to advocate for themselves getting better care.

There was also recognition that not everyone in a “community” was homogenous, people have intersecting identities, and this impacts their experience of services. The difference between equality and equity was highlighted, which was something raised during the first public evidence session the committee heard.

In general, it was recognised that one problem or barrier often caused a horrible chain reaction of events for people. Once that reaction was set off it was then incredibly hard for people to access the support needed to stop it. This often ends in intervention at the point of crisis and increases our reliance on the health service. One participant described this as the “trip wires in life” which lead to people experiencing poorer outcomes and worsens inequalities.

The Health & Social Care & Sport Committee has now started taking formal evidence as part of its inquiry. Claire Stevens gave evidence during the first of these sessions on behalf of VHS, you can watch the session below or read about it here.