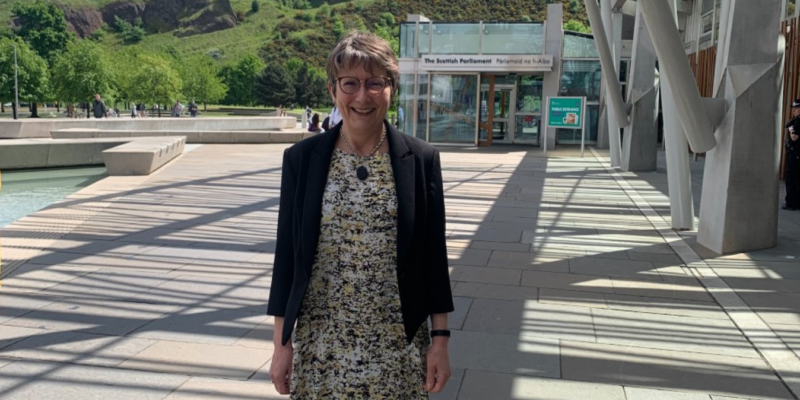 VHS’s Chief Executive Claire Stevens has given evidence to the Health Social Care and Sport Committee in the Scottish Parliament, as they begin taking oral evidence for their Inquiry into Health Inequalities.

This opening evidence session took place on 24th May, but it followed four informal evidence sessions  that VHS had co-organised and co-facilitated with the Scottish Parliament’s Participation and Communities Team on 20th and 23rd May. These informal sessions had enabled the Committee to engage with a wide range of people with lived experience of health inequalities and with the voluntary health sector, NHS and researchers.

Over the two hour question and answer session Claire Stevens gave evidence, alongside Gerry McCartney of Glasgow University, both of them attending in person.  David Walsh of Glasgow Centre for Population Health and David Finch of the Health Foundation contributed evidence remotely.

Watch the 24th May session here: Scottish Parliament TV broadcast  or read the Official Report of the session.  The media platform Health and Care Scotland also published an article analysing the session.

In her opening statement, Claire explained that VHS’s core purpose is to work with its members and other stakeholders to address health inequalities and to create better health and wellbeing for all people and communities.  She agreed with Gerry McCartney that the health inequalities gap in Scotland is widening not narrowing, and said that any green shoots of progress were in danger of being cut down by the pandemic and the growing poverty crisis. She pointed out that people in Scotland’s most deprived areas will spend half of their lives in poor health, 24 years more than people in the most affluent areas.

She drew attention to the role of the third sector in mitigating the negative impact of health inequalities, for example  by providing targeted services and support; tackling social isolation, loneliness and stigma; building social capital through community development and place based work; and homing in on those left behind or overlooked by public policy and services. She stressed that voluntary organisations also work upstream, carrying out research, campaigns and education to help improve law, policy and practice, and playing key roles in local and national partnerships and community empowerment. They do all this without reliable or sustainable funding for the most part, she said, and in the face of growing demands and needs.

In her concluding remarks, she said that the kinds of upstream strategies that the voluntary health sector wants to see are:

VHS will be publishing a separate blog about the four informal evidence sessions in the near future.