You are here: Home / Blogs / Sir Harry Burns on The Failure of Public Policy 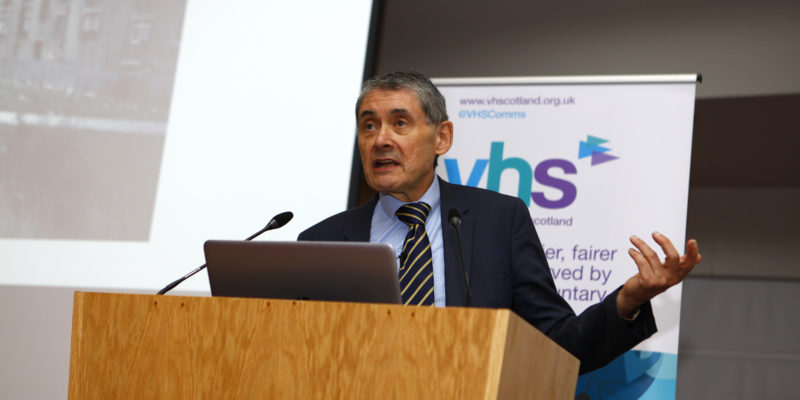 At our annual conference, Professor Sir Harry Burns talked to John Macgill of www.healthandcare.scot about the voluntary sector’s role in tackling despair. Here we publish the interview in full.

Public policy continues to fail too many people in Scotland because it tries to do too much to too many people without listening to any of them. And change lies in adopting the ‘one person at a time’ approach of Scotland’s voluntary sector.

That’s was the message of a keynote address to the VHS annual conference from Scotland’s former Chief Medical Officer and now Professor of Global Public Health at Strathclyde University, Sir Harry Burns.

Sir Harry says the evidence shows people at what might be described as the lower end of the social scale are living with a sense of despair, with few seeing any way out of their predicament.

“All these people have seen over the last decade or more is public policy that has left them on the margins. This is public policy that tells you, if you’re not making the right decisions, then it’s all your fault; whereas, in truth, the science tells us that people who are born and raised in chaotic circumstances find it difficult to make the right decisions – that it’s not their fault.”

What Sir Harry brands a failure of public policy is also, for him, an opportunity for the voluntary sector.

By contrast, Sir Harry says government’s problem is that it tries to do too much, too soon, to too many people and, in doing so, it misses the point.

“It misses the point that human interaction is the basis of change,” he says. “By contrast, the voluntary sector does what it does through human interaction. The sector can change policy by demonstrating that it is changing lives.”

Sir Harry says it was important for him to speak at the VHS conference because of its focus on the role of culture in achieving wellbeing. He cites three charities: GalGael, teaching people to carve wood, to get the satisfaction from making things; Sistema Scotland, teaching children musical instruments; and Centrestage, a charity based in Kilmarnock that started off life teaching young people to sing and dance.

“If you define culture as the things that people do that give them pleasure and enjoyment, then culture is an important way to make a difference. Being part of a group centred on some sort of cultural pastime can be a stepping stone to transformation, can awaken an individual’s sense of purpose and self-esteem.”

He believes politicians are worried that, if they move towards more coproduction, they will be pilloried if something goes wrong and held up to ridicule for allowing established rules and systems to be ignored. But, she says, politicians and the rest of society need to realise that the old model has not delivered for people on the edges.

“The voluntary sector, by contrast, can fill the gap – not by trying to be more like the public sector, but by being what it already is.

“The voluntary sector has something precious,” says Sir Harry. “It has the capacity to interact in a non-judgemental way and learn in the process of doing that. The public sector should be more like the voluntary sector.”

John Macgill is Director of Scotland’s Health and Care New Channel  healthandcare.scot  –  VHS’s media partners for Get the Picture: Culture, Health and Wellbeing . The conference took place in Edinburgh on 20th November 2018.