You are here: Home / Blogs / Sarah’s blog: Getting The Picture with Dr John Ennis 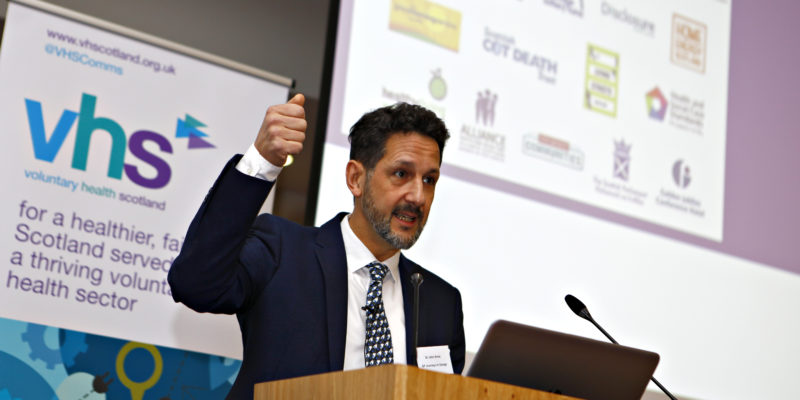 Whilst chairing VHS’s busy annual conference Get the Picture: Culture, Health and Wellbeing, Dr John Ennis took time out to catch up with me.

Professor Sir Harry Burns’ opening keynote address focused on the importance of adopting a ‘what matters to you’ approach when working with individuals, to try and address health inequalities. As a former GP turned curator,  John Ennis is well placed to offer observations on two fronts in particular: on the importance of engaging with those at the sharp end of health inequalities, and on the potential of arts and culture to be used as a tool to help those in need. John is the curator/producer of GP Journeys in Design and Our Linen Stories

I asked John for his thoughts on whether within health and care settings there is the desire, or indeed the time, to push for the proliferation of art and culture as a means of improving a nation’s health and wellbeing, rather than something to be indulged only when times are good.

The picture painted by Harry Burns of societies where increasing health inequalities mean individuals and communities become victims of ‘deaths of despair’ is a powerful and arresting one, John explained. It’s impossible to be a medic and not be aware of the most needy – the poor and marginalised – and GPs are of course aware of the need to offer agency for people whose voices are not easily heard.  Whilst the argument is not lost that culture can have a very positive impact, he emphasised the pervading reality in professional practice, where there is simply so much less time on a daily basis to incorporate new modes of treatment. The good news is that increasing use of alternative prescriptions, for fitness sessions or craft classes for example, is providing real evidence of benefit for individuals. John was adamant that the desire to incorporate more cultural interventions is there. He observed the variety of examples on display at the conference demonstrating how cultural interventions can help reduce health inequalities – from the potential of art activism in raising agendas to the processes of making together in reducing isolation.

Medicine is a broad church, John observed and in Scotland he noted a sensibility that exists where cultural interventions are appreciated as able to empower individuals to be advocates for their own health.

I moved us on to assertions made recently that not enough is being done to push the preventative agenda in Scotland, notably the report on Preventative Action and Public Health from the Scottish Parliament’s Health & Sport Committee published earlier this month. John explained that the argument in favour of shifting resources from frontline to preventative services has been made for at least the past 20 years, but that currently there is an incredible pressure across all services and a focus on new healthcare technology in the acute and long-term condition sectors. It’s clear we run a National Sickness Service not one focused on Wellness. Despite this perennial argument in favour of prevention, he suggested it is surprising that in Scotland, where there has been an emphasis on shifting the focus in policy terms, there has not been the required shift in terms of where investment is made. In fact, he noted, the debate moves beyond one of preventing ill health to one where we offer wellness through agency and opportunity – the thrust of Harry Burn’s address. John doubted NHS Scotland is at all the right vehicle for achieving this without more explicit change in culture and funding mechanisms.

In the coming months John will continue his work with the Our Linen Stories  project that platforms contemporary Scottish designers, highlighting the links between art, design, trade and industry. He is also collaborating on development of projects within his Making Well series, where mindful design meets well-being and sustainability.

Sarah Nimmo is a journalist with Scotland’s Health and Care News Channel healthandcare.scot  –  VHS’s media partners for Get the Picture: Culture, Health and Wellbeing  The conference took place in Edinburgh on 20th November 2018.