You are here: Home / Blogs / Ewan’s Blog: How to have your voice heard at Scottish Parliament 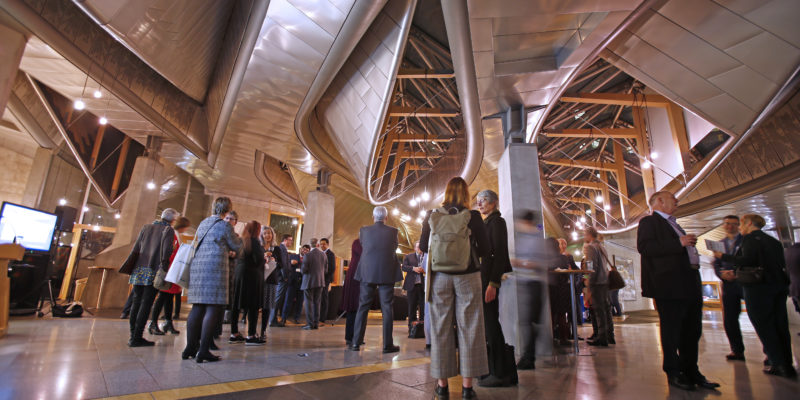 The Scottish people have recently elected a new cohort of MSPs to represent the Constituencies and Regions of Scotland. With it brings the most diverse group of elected representatives we’ve had in the Parliament’s 22 year history. Fresh faces bring fresh ideas and enthusiasm to engage with organisations like those at the conference today. The Participation and Communities Team (PACT) are delighted to be here today to answer any questions you have about exactly how to have your voice heard by those who are elected to represent us.

The PACT team is made up of 9 people who support the Parliament’s Committees to hear from as diverse a range of voices as possible as it scrutinises the work of the Scottish Government. We can only do this with the support of community and third sector organisations who know their communities better than anyone. We work to establish networks and partnerships across Scotland to support those seldom heard voices to reach the Committee rooms in Holyrood.

Each local authority area in Scotland has a designated Community Participation Specialist who is responsible for developing these networks and partnerships. They work to build capacity among community groups to understand the Parliamentary process, to learn from communities about how they would like to be heard, and to support the Parliaments Committees to reach out in a way that is meaningful and impactful.

If you would be interested in speaking to the PACT colleague for your area then please drop them an email to introduce yourself and your organisation.

Despite the restrictions of the past couple of years the team has continued to ensure that the Scottish public are able to share their views. The crash course in digital communications that we have all been on has brought a number of benefits that are sure to be long lasting but with it is the risk of further marginalising those without digital access.

There was a consensus among the participants that virtual meetings had facilitated a broader participation of organisations over a wider geographical area with more witnesses participating from outwith the central belt. However, there was also a concern that virtual engagement could exclude those with poor quality broadband or those who did not own or could not access the digital devices to participate online. The participants recognised the efforts made by the Parliament but highlighted the importance of ensuring that virtual engagement was accessible to all.

The following quote was contained in the final committee report:

“The Committee considers that it is important that there should still be opportunities for stakeholders and the public to engage with the Parliament and to inform the scrutiny of legislation and policy. In particular, the Committee would highlight the importance of promoting equity in that process, being mindful of ways in which the most marginalised, the disabled, those without access to or experience of the necessary equipment and those in rural and remote areas can all participate in virtual proceedings and engagement activities.”

This is the challenge that faces us as we begin to open up more as a society and we would be keen to explore this with you today and in the weeks and months to come.