You are here: Home / Blogs / Claire’s blog: Loneliness is a hard slog so let’s tackle it together 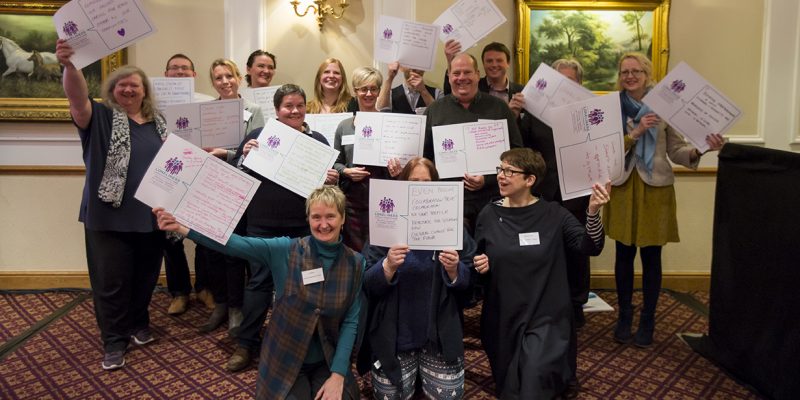 “I am very keen to keep on prodding out to the community.  We look like a secret service building or prison, but we are actually quite nice and if you would like a cup of coffee come in and see us.  So we are working away at that level.  It is a hard slog.”

So said Jim, a 75 year old gay man with HIV and Parkinson’s. His story was related by Aidan Collins of   HIV Scotland at a seminar we held on health inequalities and older people in 2014. Aidan painted a vivid picture of how Jim found himself socially isolated and lonely after moving to sheltered housing, and so began VHS’s interest in the relationship between loneliness and health.

There may be no X Ray for loneliness and no blood test for social isolation, but 91% of voluntary organisations in our 2015  Living in the Gap report were quite clear that social isolation and loneliness were defining features of health inequalities.

Since then, the issue of loneliness and health has come more and more to the fore, gaining traction as a topic of policy concern both in Scotland and the rest of the UK. The Scottish Parliament’s Equal Opportunities Committee Inquiry into Age and Social Isolation marked a turning point in political interest in Scotland, leading to the Scottish Government committing itself to creating a national strategy on social isolation and loneliness. Befriending Networks held a national summit and published Loneliness in Scotland: A National Summit.  A partnership was formed by  British Red Cross and the Co-operative Group  to tackle loneliness and their report Trapped In A Bubble published. The Jo Cox Commission on Loneliness  started a national conversation about tackling loneliness and the Campaign to End Loneliness  was awarded a Big Lottery grant to extend its work into Scotland. Dr Catherine Calderwood, Chief Medical Officer for Scotland, included the following quote from VHS in her second Annual Report: Realising Realistic Medicine:

“Loneliness and social isolation are public health and health inequalities issues. Realistic medicine can help address this challenge, with its emphasis on improvement and innovation, shared decision-making, and a personalised approach to care. Our vision should be for kinder, more inclusive and enabled communities. To get there we need joined up, strategic action across all the social determinants of health and strong partnership working between our public, third and community sectors”.

Volunteering is a crucial element in any discussion about kinder, more social communities, because volunteering is highly social and involves reciprocal relationships. Cabinet Secretary for Communities, Social Security and Equalities Angela Constance MSP’s description of volunteering as the golden thread of Scottish life has received a lot of attention, and our colleague Alan McGinley at Arthritis Care  has pointed out that the voluntary sector itself can be described as an invisible thread running throughout communities.

Last week, the subject was under scrutiny again, this time at a Holyrood Events conference (22nd March 2017) on tackling loneliness and isolation in later life. I had the difficult task of winding up the day, following an array of thought provoking and content-rich contributions from members of the Scottish Older People’s Assembly and the likes of Derek Young of Age Scotland and Cathy Steer from NHS Highland.

If you are interested in what I had to say, read more here: Kinder, More Social and Inclusive Communities – VHS presentation – 22 March 2017

If you’re a voluntary health organisation keen to contribute to the debate on loneliness and health, why not tell us your news or write a guest blog – we’d love to hear from you.