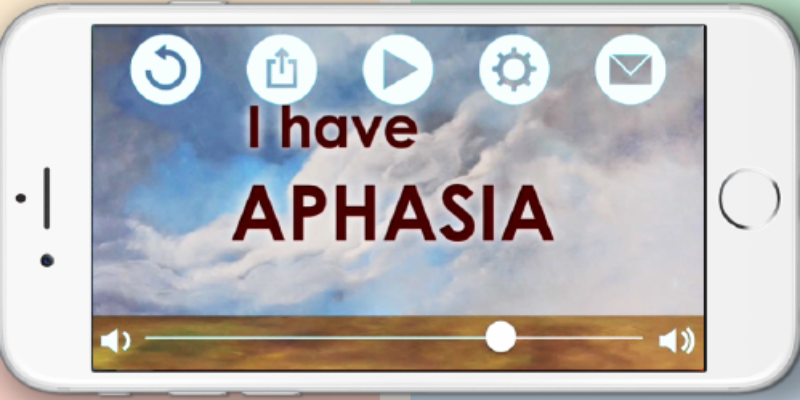 Living with Aphasia isn’t easy!  The stress and pressure that comes from; being unable to locate the simplest of words to communicate fluently, being unable to read a sign, a newspaper or a book, or being unable to count and seeing a supermarket receipt as a swarm of numbers making little or no sense, is all difficult enough. But then to continuously have to try and explain this to people who don’t know what Aphasia is can be an absolute nightmare.

No… I am not stupid!

Tayside Healthcare Arts Trust’s (THAT) ST/ART Project is an NHS Tayside funded project promoting the use of Creative Engagement programmes for people recovering from and living with the consequences of Stroke and Acquired Brain Injury. We work in inpatient rehabilitation units, with community based groups and with mainstream cultural and educational partners. Our response to Aphasia has always been to creatively challenge and encourage our aphasic participants to tackle the subject head on.  Over 16 years we have enabled participants to communicate through printmaking, film, singing, music making, creative writing, drawing & painting and crafts.

In 2013 an Aphasia support group was established at the User Centre of the Computing Department at the University of Dundee, supported by NHS Tayside’s Speech & Language Therapy Service. The ’Tap & Talk Group’ focus on the potential of the iPad as a communication aid, using the existing in built technology to help develop their knowledge and skills for electronic communication.

Creative play is a great way to get to know any tool or medium and explore its’ (and therefore our own) potential!  Most of our programmes follow an 8 week x 2hrsessional programme model designed to ensure sufficient time for participants with Long Term Conditions (LTC) to engage, develop and achieve.  Having seen iPads used as stop frame animation cameras on a different ST/ART programme it seemed like a very good option for working with the Tap & Talk Group, opening up a more creative way of engaging with their equipment.

Andrew Low an award winning animator was brought in to lead the programme in the summer of 2016. We worked on the programme collaboratively to recognise the groups shared communication impairment and be technically accessible as well as fun and informative.  The subject matter and content about Aphasia was co produced with the group and their shared experiences and personal stories became the driving narrative of the animation work.  We were also fortunate to have the support of documentary film maker Steve Soave who was able to capture a fly on the wall view of the programme’s development.

The 8 weeks were enormous fun and the participants relished the opportunity to tell their collective story whilst learning more skills with the iPad.  Their perspective and experiences were eloquently expressed and they quickly realised they were explaining the condition for an unknowing world.  They created a concise 90 second “I have Aphasia” animation and a 6 minute film “Aphasia in our own words” combining animations with members of the group speaking to camera.  Steve Soave also produced the documentary film about the project “Aphasia – Telling our story”.  The final session of the programme in October 2016 was a screening of all three films with assorted guests, friends, families and professional colleagues in attendance.  The overwhelming response was positive with the animated short seen as a significant piece of work that should be developed in a way that would allow the group members and others to use it.

It needed to be an iPad app!

Through connections at the Stroke Association Scotland, THAT was able to secure the support of Dog.fish Mobile, a scottish based app development company who agreed to work with the programme team to build the necessary technological engine to deliver the animation as an easy access app.  The development was a user centred iterative design process with input from all the stakeholders and by spring 2017 we had a viable app ready to launch through iOS – Apple Inc.

Ironically one final hurdle needed to be overcome.  Apple rejected the app for licensing through the app store as they considered its operation too simple.  All the work that had been put into its functionality to ensure it was manageable for people with Aphasia was now a barrier to its industry acceptance.  Fortunately a strongly worded explanation about the intrinsic necessity of simple functions and the potential benefit for thousands of people achieved a very quick reversal of Apple’s decision and the app was launched by the Scottish Government Health Secretary on June 30th 2017.

All three films can be viewed here.

View the poster which has been chosen as a finalist for our Annual Conference Poster Competition: START & APHASIA App