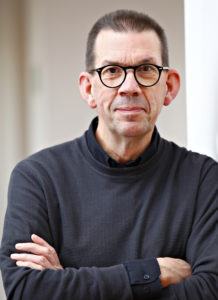 I have been working in the voluntary sector since 2006 starting in small organisations in south-west Scotland, working in projects involved with people disadvantaged by lack of work, poor mental health, geographical isolation, lack of affordable rural housing, domestic abuse, addiction, imprisonment and poor literacy & numeracy. As part of all of this I developed some ability as a fundraiser.

Following up on a suggestion from the Robertson Trust, in 2012 I set up the Scottish justice reform charity Positive Prison? Positive Futures and was CEO until it closed down following my sustaining a stroke in March 2019. I’m now on a positive recovery journey, working to start a new collective movement ‘Only Just Scotland’ initially to identify and secure the legacy then build on the experiences and successes of PP?PF to  continue as a constructive disruptor within the justice community.

As of February 2020, in addition to my role as trustee & vice-chair of Voluntary Health Scotland  I am a trustee of SCIOs Aid & Abet and Braveheart Industries. I am also a member of HMIPS Independent Prison Monitoring Advisory Group and a Fellow of the Royal Society of Arts. I am currently involved in the Carnegie Trust Kindness Innovation Network and the International Futures Forum.

Previously I have served on the board of Vox Liminis & the Howard League Scotland and on the Scottish Government Justice & Health Leaders Network and committees to Redesign Community Justice in Scotland and the setting up of Independent Prison Monitoring to replace Visiting Committees in Scottish prisons. I have also served on the National Prisoner Healthcare Network Advisory Board and the Scottish Public Services Ombudsman’s Customer Sounding Board.

Away from work I enjoy singing, cooking, photography and, when fit, being out of doors cycling, mountain biking and hillwalking.

Key Messages: Shaping primary care for the next generation in rural Scotland